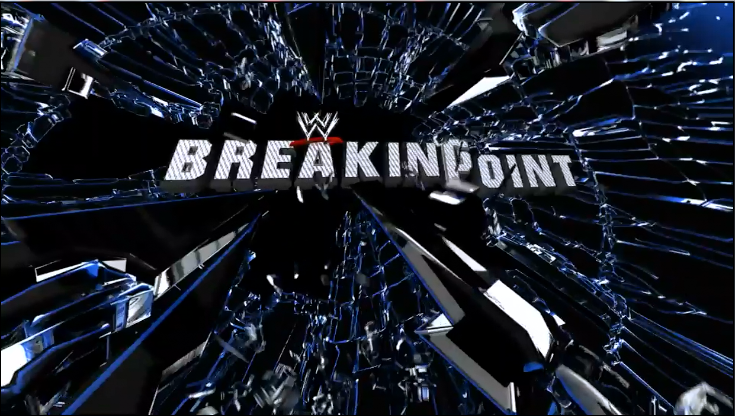 ENTER A WORLD OF SUFFERING, WHERE EVERYONE HAS A BREAKING POINT, AND THE CHALLENGE IS TO FiND IT. Why do I feel that’s directed at me?

Awesome theme for the PPV though. Unbroken by Lynyrd Skynyrd!

. Hope they get some time to be all BEEFIE together.

Jericho is a little confused and wanders into the wrong corner, only for Henry to just fucking blast him in the face

Henry tags in, and yes, Jericho runs to tag in Big Show

. Henry picks Show up for a body slam with ease, walks with him a couple of steps, but Jericho comes from behind to knock him over and let Show land on him! Gotta say, I am SO HAPPY they did the spot that way. Henry still didn’t ACTUALLY slam Big Show yet (saving it for the finishing stretch I’d assume), but at the same time it wasn’t that lame “oh noes he can’t do it” spot that happens far too often. Well done, guys

They try to turn Henry into the FIP, but no such luck lol. Not long before he’s tagging out and MVP comes in to ruin things

Time for MVP to be worked over, and meh, nobody cares really. This show is in Montreal so the fans are behind Jericho, so it doesn’t help that MVP can’t get any fan support

HENRY IS BACK IN THE MATCH~!

Jericho gets destroyed, Big Show comes in and even he gets taken out by the not-quite World’s Strongest Man!

Awesome counter to the Code Breaker, but Show decks Mark with a WMD punch and this one is over.

Nothing amazing, but this is certainly an inoffensive match

A backstage interview with Cody and Teddy? OH BOY I BET THIS IS EXCITING!!!

They do lots of punching, in the ring, then into the crowd, then at the merch stand. At one point the crowd start on OLE chant. Was Zayn in attendance?

After far too long doing some shitty brawling in the crowd, they make their way back to ringside, where HHH makes good use of a chair to aid him in a Boston Crab, with HBK joining in on the fun too before Teddy makes the save.

Aaaand more brawling in the crowds, with a weird “big bump” by HBK that just kinda came out of nowhere and nobody seemed to react

Shawn is dead or something, leaving HHH to fend for himself. I am SO FUCKING BORED right now.

Ok, now HHH is dead and they just kinda ignore him and go after HBK who has been revived by the Dragon Balls or something.

Best part of this match so far is a Spike Piledriver tease.

In the end, a Figure Four on Shawn using the ring post while Teddy applies the Million Dollar Dream finally forces a submission. I personally tapped out ages ago. This was terrible.

Also, HBK in a SUBMISSIONS MATCH in MONTREAL… and not a single Sharpshooter to be seen?

Orton backstage getting interviewed about the Legacy match, and he looks like he’s falling asleep

Kane in a Cane match. Ha.

This match is hilariously bad

EVE~! Talking with Punk about his upcoming match against THE UNDERTAKER

. Jimmy Wang Yang scares the shit out of Punk by turning the lights out and making him think Undertaker is there

. Jimmy Wang Yang gets beaten up

Well, WWE fucked us over at SS by having this match go seconds. Thankfully they make up for it with this one

. Have I mentioned I got to see Regal Vs Christian LIVE for the ECW title on an ECW taping a month after this? And it was AWESOME

Regal comes to the ring with BIG ZEKE and VLAD, and looks like the cockiest motherfucker on the planet… until it’s announced that TIFFANY (

) has banned them from ringside!!!

Regal wisely taking off his coat BEFORE the bell rings tonight. He ain’t wanting no repeat of SummerSlam, and no wrestling fan with any sort of love for the business does either.

Aggressive as fuck tie up to start things off, followed up with an ELBOW TO THE FACE by Regal, which Christian answers with a SLAP TO THE FACE and a Killswitch attempt!!! 30 seconds in and this is already the best thing on the show!

Regal is already bleeding from the mouth and I think it likely happened from one of the huge slaps to the face lol. Regal gains come revenge when he knocks Christian off the apron and Christian bumps in a way that makes it seem like he is hurt BAD. Such a fantastic bumper, is Christian.

Watching these two just work a couple of spots from a Gecko Roman Knuckle Lock is masterful. Oh how I wish Regal was still a fully active in ring competitor right now. Same with Christian, actually. Seems he’s retired without any real announcement

the Half Nelson suplex from Regal has to be one of my all time favourite moves EVER. I always give it to my CAW in wrestling games… at least when it’s available in the game. I know they took it out at one point and I was sad

. Regal NEEDS that ECW Championship, and is willing to DESTROY Christian to gain it!

. All of this punishment to the head/neck area sets up Christian perfectly for EITHER the Regal Stretch submission or the KNEE TREMBLER. William Regal knows exactly what he’s doing!

Absolutely EVERYTHING Regal does in this match looks nasty and knarly and is designed to fuck up Christian’s head in some way.

Christian is firing back on Regal, even charging at HIS face with an elbow for a bit of retribution. Regal manages to put an end to the momentum at one point, but ONE mistake from Regal allows the ECW Champion to land the Killswitch and this match is over!

Epicness. Just pure epicness. And their ECW TV match is even better

. I’m biased though cos I was there live

Pat Patterson comes out, then Ziggler interrupts and attacks him, and Morrison comes out to check on him while Ziggler just slowly walks away. How… utterly pointless.

One down. 3 to go. I can do this. Once I get through this, I’m halfway done with their 09 matches together. Well, not exactly half way because, you know, Iron Man… but yeah…

Cena hits the 5 Knuckle Shuffle in this match. Is he trying to make Orton quit out of sheer embarrassment?

HANDCUFFS~! Things are about to get KINKY in Montreal! Pat Patterson must have a huge… smile right now.

Orton pounds Cena in the head a few times and then… unlocks the cuffs, so he can move him and tie him to the ring post instead.

This match seems to be all about what Orton it WILLING to do to make Cena say I Quit, and what Cena is ABLE to take and not say I Quit.

I know blood isn’t typically really needed to make a match, but man, if this wasn’t during the PG years, I can imagine Cena being covered in blood at this point while hanging from the ring post and it really would have added to the match imo.

SINGAPORE CANES~! Orton is brutalising Cena here, but he simply WILL NOT QUIT.

LOW BLOW~! Orton falls down and that gives Cena the chance to unhook himself from the ring post, but he is still handcuffed. Props to Cena for taking all those unprotected cane shots to the stomach too. Guy looks like he has stretch marks from giving birth… and they are bleeding

Well, Cena managed to escape the ring post before, so this time Orton makes sure to HANDCUFF him around the ring post so there is no escape!

Orton is basically torturing Cena live on PPV at this point. Thus making Orton the biggest babyface in the history of wrestling

CENA GETS THE KEY~! CENA IS FREE~!

CENA HANDCUFFS HIMSELF TO ORTON~! Orton is fucking terrified, while Cena is fucking PISSED. Orton has just been torturing Cena for the last 10 or so minutes, and now he has NOWHERE TO RUN from a very, very angry John Cena!!!

Orton grabs around his neck for the key, only to realise it isn’t there, but sees it over the other side of the ring and desperately begins to reach over for it, while Cena does whatever he can to keep him away!

I’m still not fond of the way Orton quits straight away, but I don’t think I hate it quite as much as I did back when it first happened. And I think overall I enjoyed this match more too. Still not anything great, and their NWO 08 match still shits all over it, but hey, it’s a not bad Cena/Orton match, and that has to count for something, right?

Oh yeah Cena is the WWE Champion again lol. Forgot the title was on the line

Hmmm… this PPV is in Montreal. Where, as I mentioned earlier, the Montreal Screwjob happened in 1997. They didn’t tease anything with that during the HBK match, and Cena wasn’t screwed over in the I Quit match… so logically, a screwjob MUST happen in this match! Because let’s face it, Undertaker is NOT tapping out to Punk, or anyone else for that matter (except kinda sorta Lesnar that one time and kinda sorta Angle that other time…).

Punk is the only STRAIGHT EDGE World Champion in history. Hmmm… I think MR BACKLUND might have something to say about that tbh!

Punk tries to stick and move early on here, doing his best to avoid the POWER of the Dead Man. It doesn’t work for long.

Remember that running jumping SUPERKICK that HBK hits on Foley at Mind Games ’96? Well, Punk does that to Undertaker here without the use of a chair!!!

STRIKE EXCHANGE~! Punk looked like he could stand toe to toe with Taker here thanks to some sweet kicks to the head, but not even that is enough to beat Undertaker one on one in a strike exchange!

Speaking of sweet kicks to the head, Punk counters a chokeslam with one and Undertaker just CRUMPLES to the floor!

HELLS GATE~! PUNK TAPS OUT~! UNDERTAKER IS THE NEW WHC!!!

Wrong! Enter SCREWJOB part 1… Teddy Long comes out to inform us that Hells Gate was BANNED in 2008 by Vickie Guerrero, and never actually reinstated, so this match will need to continue!!!

Well, pissing off The Undertaker is not a smart thing to do, but Punk is still able to lock in the Anaconda Vice, and OMG THE REFEREE RINGS THE BELL, HANDS THE TITLE TO PUNK AND RUNS LIKE THE WIND!!!

Well, we all knew another Montreal Screwjob was gonna happen at a Sumissions PPV in Montreal lol, and this was likely the best match to do it in. Undertaker loses, Punk keeps the title, but the Dead Man still never taps out.

Finish is what it is, not hugely fond of it, but the rest of the match is really good. Their SD rematch however is tremendous, and a top 3 match they had together along with the SD match in 2010, and WM 29!